Inspired by Catriona Shearer (if you don’t know who she is, seriously, check out her puzzles), this week’s Riddler Express is a geometric conundrum: 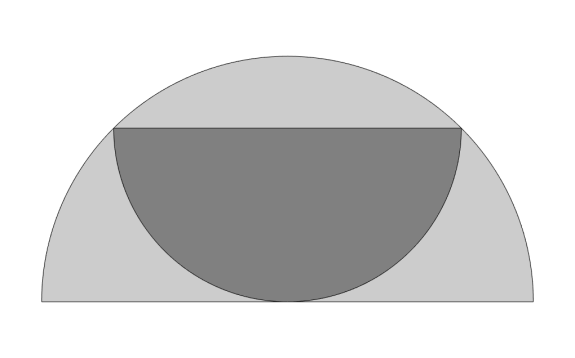 where $r$ is the radius of the smaller semi circle.

You are given a fair, unweighted 10-sided die with sides labeled 0 to 9 and a sheet of paper to record your score. (If the very notion of a fair 10-sided die bothers you, and you need to know what sort of three-dimensional solid it is, then forget it — you have a random number generator that gives you an integer value from 0 to 9 with equal probability. Your loss — the die was a collector’s item.)

To start the game, you roll the die. Your current “score” is the number shown, divided by 10. For example, if you were to roll a 7, then your score would be 0.7. Then, you keep rolling the die over and over again. Each time you roll, if the digit shown by the die is less than or equal to the last digit of your score, then that roll becomes the new last digit of your score. Otherwise you just go ahead and roll again. The game ends when you roll a zero.

What will be your average final score in this game?