Earlier this year, a new generation of Brood X cicadas had emerged in many parts of the U.S. This particular brood emerges every $17$ years, while some other cicada broods emerge every $13$ years. Both $13$ and $17$ are prime numbers — and relatively prime with one another — which means these broods are rarely in phase with other predators or each other. In fact, cicadas following a $13$-year cycle and cicadas following a $17$-year cycle will only emerge in the same season once every $221$ (i.e., $13$ times $17$) years!

If both $A$ and $B$ are relatively prime and are both less than or equal to $20$, what is the longest stretch these two broods can go without interfering with one another’s cycle? (Remember, both broods just emerged this year.) For example, if $A$ is $5$ and $B$ is $7$, then the interference would occur in year $15$.

Using the code below, we see that the longest stretch the two broods can go without interfering with one another’s cycle is $\textbf{153}$.

The astronomers of Planet Xiddler are back!

How many years will it be until the three planets are again collinear (not necessarily including the star)?

the above determinant reduces to

Solving the above equation numerically for $t$, we get the time period until the three planets are collinear next to be $\textbf{7.766}$ years.

The Python code for numerically solving the above equation and plotting the positions of the three planets is given below.

The diagram below shows the positions of the planets when they are collinear next. 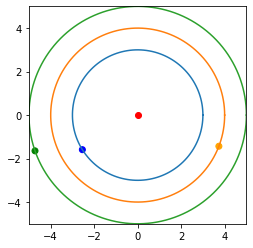