For a graph $G(V,E)$, the integer programming model for finding the vertices that belong to the maximal independent set is as follows

The Boolean Satisfiability Problem or in other words SAT is the first problem that was shown to be NP-Complete. A given boolean expression, determining if there exists a truth assignment to its variables for which the expression is true is defined as the satisfiability problem.

When we’re discussing the SAT problem, it’s essential to know about the conjunctive normal form (CNF). A boolean expression is said to be in CNF form if it’s a conjunction of a set of clauses, where each clause is defined as a disjunction (logical OR) of literals. We can define a literal as a variable or a negation of a variable.

Every boolean expression can be expressed as a CNF by repeatedly using De Morgan’s Laws, the law of double negation and distributive laws under AND and OR:

The corresponding incidence matrix of the graph can be found here.

The model for finding the maximal indepedent set using the incidence matrix is given by:

In computer science, the clique problem is the computational problem of finding cliques (subsets of vertices, all adjacent to each other, also called complete subgraphs) in a graph. Common formulations of the clique problem include finding a maximum clique (a clique with the largest possible number of vertices), finding a maximum weight clique in a weighted graph, listing all maximal cliques (cliques that cannot be enlarged), and solving the decision problem of testing whether a graph contains a clique larger than a given size.

A maximal clique is a set of vertices that induces a complete subgraph, and that is not a subset of the vertices of any larger complete subgraph. That is, it is a set $S$ such that every pair of vertices in $S$ is connected by an edge and every vertex not in $S$ is missing an edge to at least one vertex in $S$. A graph may have many maximal cliques, of varying sizes; finding the largest of these is the maximum clique problem.

Find the maximal clique in the graph below: 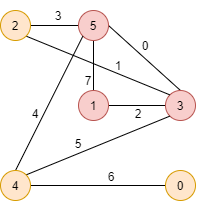 The incidence matrix for the graph is 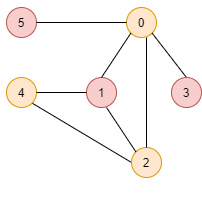